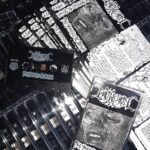 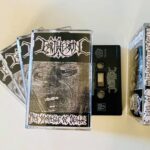 The long sold out and very rare Bactherion demo is finally available again, in a facsimile Tape reedition, after 30 years of its original and only release!!
The importance of this demo in the Portuguese Black Metal history is undeniable for being the predecessor of Filii Nigrantium Infernalium, and for being one of the oldest and still active band of the Portuguese scene!

All started with Belathauzer, Nuno and Tetragrammaton (ex-Moonspell, Deepskin) in 1989. The band started rehearsing as a trio, and at the time were highly influenced by Treblinka, Hellhammer and Necro Schizma. “The Miracle of Death” was released on July 26th 1991, recorded on a 4-track recorder at the Morbid God (pre-Moonspell) rehearsal place. Following Jerzegemoth’s departure, Belathauzer decides to change the band´s name to fit in the concept they adopted to develop. The result was Filii Nigrantium Infernalium.